I went out to Bear Trap Cave near Minidoka, Idaho. My friend Fatu drove his Jeep, and we set out on the 100+ mile trek out into the desert. When we left, the sky was gray and overcast, but we were undeterred. About 80 miles into the desert, and we got lost. We were still undeterred. We came across Brigham Point Cabin right as the sun went down, and the sky cleared up. We stopped and did some light painting at Brigham Point Cabin with some blue in the sky. Then we continued on our quest. We started driving faster and faster trying to get to the cave before the stars started to pop. We came around a corner and started to drift. Then we say it. A huge gaping hole in the earth. We slid the Jeep sideways right up to the rim of the cave. We got out of the Jeep, and even though it was new moon, it was bright enough to see. The light was coming from the milky way. We decided to secure the perimeter and venture into the cave. Bear trap cave is a huge lava tube that stretches over 15 miles under the Idaho desert. One of these photos required me to walk a quarter mile into the cave in the pitch black with out turning on my flashlight. That was a wild experience. I was scared stiff, but determined to create the image. I could feel the darkness enveloping me, but I continued on. About half way back I thought to myself, “what am I doing here. It is 1 a.m. and pitch black, and you are underground and unarmed….Oh well.” This was great fun and I recommend you go spelunking as soon as you get the chance. 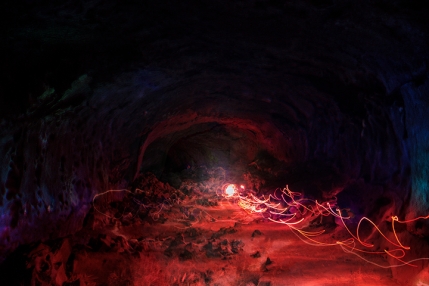 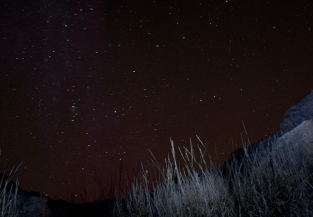 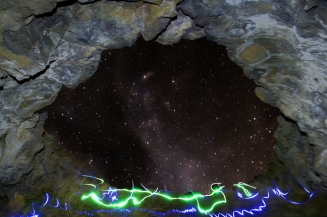